2019 was a year of many highlights!
​
A long term dream of mine has been to visit Carl Hester’s gorgeous yard. In 2019, I was lucky enough to do this with the International Dressage Officials’ Club, it was a chance to meet Carl’s fantastic team of horses & to watch Charlotte ride Valegro while Carl gave us a brilliant lecture, as well as catching up with many New Zealand & Eastern States Dressage friends. It was a very special day! Enormous thanks to Isobel Wessels, Suzie Hoevenaars & Maria Schwennesen for making this wonderful day possible.

Ellis Brook Da Vinci (Max) & I were selected on to the La Noir Saddleworld EWA Recognition Dressage Squad this year. This is the first time I have been on the EWA High Performance Squad since Ellis Brook Lorenzo (Andre) retired from competition to become a schoolmaster, & it is very good to be back! I have found the High Performance Workshops & Protocol Days really valuable. We have had a lot of fun training & competing, & Max has also been awarded Gold DWA High Performance Medals for his good scores in Elementary & Medium Tests.

Another highlight for the year was my first invitation to judge at an FEI International in Germany. It was a fantastic event at a charming location - Uberherrn - with a delightful
group of officials and a huge array of horses from all corners of Europe including 3 riders riding for Australia! Uberherrn was just one week after I judged at Hartpury International Festival of Dressage in the beautiful Cotswolds in the UK. As always at Hartpury, there was a big list of top judges who were as warm and friendly as always, and riders travelled from all over Europe to compete in the FEI events (CDI3* & CPEDI3*), as well as national classes, a 6 day show with close to a thousand tests. There was a full team from Carl Hester’s yard, including potential Tokyo contenders Charlotte Dujardin on Mount St John’s dynamic Freestyle - winning the Grand Prix & the GP Freestyle, & Carl on Hawtin’s Delicato winning the GP Special.

Andre (aka Ellis Brook Lorenzo) is continuing to enjoy life as a part time schoolmaster, helping riders to hone their skills. Two of his biggest fans are Vanessa & Mascha, who is spending 12 months as an exchange student in WA completing Year 12, while her own horse is at home in Switzerland. Both have completed part of their EA Intro Riding Coach qualifications on Andre.

A very important highlight this year was seeing Hamish (Ellis Brook Hermes) settle in with my good friend Vanessa Lines in his new home in Darwin after travelling from his old home with us to South Australia, then later up to the Northern Territory. He has had a super year with Ness, he loves his ‘walk-in walk-out paddock/yard’ situation in Bees Creek, & has done us all proud in competition in NT. John & I are incredibly happy that Hamish is in the best of homes with Ness & Waz, and that he is teaching yet another EA Level 2 Dressage Coach more.

Taking dressage clinics in several other states, & holding Dressage Education Seminars interstate again in 2019 has been another highlight, & I am looking forward to doing the same in 2020. I also feel very fortunate to be coaching at many of the best Dressage & Riding Clubs in WA, including Perth Dressage Club, Gidgegannup Dressage Club, Transitions Inc, Gnangara Adult Equestrian Association, Kelmscott Adult Riders Club, Swan River Dressage Inc, & Dressage Association of WA, as well as the very important Off the Track WA Coaching Program in 2020!

I specially want to thank my husband John who has been a fantastic support again all year, & wonderful friends like Catherine Macey for her fab plaiting for all our shows, Karen Gilmore for all her massages, & my brilliant eyes on the ground, Chris Thompson. I also want to thank the many people on committees in WA who put so much time effort & skill into organising clubs & events, as well as the many volunteers & officials who are vital in the continuing development of our wonderful sport of dressage! 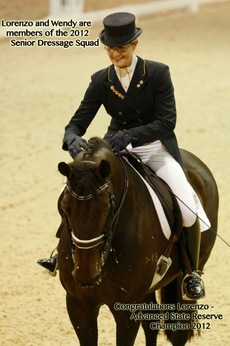 - Coaches in 4 states around Australia

- A wealth of experience in all EA disciplines

- Safety a priority at all times

What a terrific year 2018 has been!  A year ago I was contemplating selling Ellis Brook Da Vinci (Max) because he was so tricky to ride at home. I am so so grateful to Di Jenkyn for persuading me to give him one more year to grow up (thank you Di!!). Max has matured such a lot since December 2017, & we have had a lot of fun together at shows this year!
Max has exceeded all my expectations – Medium Leaderboard Champion Swan River Dressage, Elementary Leaderboard Champion Swan River Dressage, Elementary High Point Champion & Swan River Dressage Spring Gala Elementary Champion, Perth Dressage Club Highest Percentage for the Show, & in his first year at Medium Level, a Gold Dressage Performance Medal amongst many other achievements.
John & I are really sad to say ‘Good bye’ to Hamish (Ellis Brook Hermes), we will miss him enormously, but he is going to the best home we could ask for, & I simply don’t have the time to compete both Max & Hamish in the same year. We will miss him enormously, he is such a gorgeous character, but it is wonderful to know that he will be in the very best of hands in a lovely home & he will continue to compete with a great friend of mine who is a very good horsewoman & rider. He has taught me so much, as a rider, as a coach, & as a judge, & I know Hamish will do the same for his new interstate owner (Ness Lines). He loves to work, always tries his heart out, & is at his best when he is in a yard where there are just a few horses, where he is given a lot of love & attention.
Andre (Ellis Brook Lorenzo) is teaching riders so much in his role as a schoolmaster, it is amazing how he adjusts to the experience of his rider, he does sequence changes for a seasoned competitor, but is just as happy to accommodate an 11 year old novice rider!
Enormous thanks to my fantastic husband John for his support again all year, to wonderful friends like Catherine Macey for great plaiting for all the shows, to Karen Gilmore for all her massages, & to my brilliant eyes on the ground, Chris Thompson.

We are all very grateful for the terrific prizes Max has won from sponsors this year – thank you to Horseland Midland, Alkapellets, Hermitage Dressage & Valley Equine Vet Centre.

Congratulations to Ellis Brook Lorenzo who has been selected onto the
EWA State Dressage Squad again for 2013! 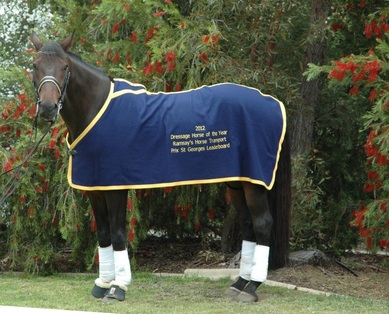 Lorenzo is one of a small number of Australian-bred horses to be selected, while most horses on the Senior Squad are imported horses.  Lorenzo was Prix St Georges Dressage Horse of the Year in 2012, and has also been successful in Intermediate I competitions recently. He has Gold Dressage Performance Medals in Medium and Advanced Levels, and a Silver FEI Performance Medal. He has been on the EWA High Performance Squad since 2010, and was EWA Hi Point Leaderboard Winner, and Narbethong Leaderboard Winner in 2009. ‘Lorenzo was a green, and pretty complicated 6 year old when we bought him, so he didn’t start to compete until he was a 7 year old, we feel he has achieved a lot, because he was quite a challenge as a green horse,’ said John Barker.

For the first week of May, Wendy is looking forward to being in Mannheim, Germany for a 4* & 5* FEI Judges’ Clinic.  The Clinic will be held alongside the Mannheim Masters CDI3* and CPEDI3* held in concert with the famous Maimarkt (May Fair). Maimarkt is the biggest trade fair in Europe, and is particularly special this year because it is celebrating its 50th anniversary.  ‘It will be fantastic to catch up with many friends at the Clinic, and to see the best competitors from around the world vying for places on the podium’ said Wendy. ‘Our sport is changing very rapidly, it is important to go to Europe to keep up with all the latest ideas.’

She heads back to the UK in July to judge at Hartpury CPEDI3* in Gloucestershire, then stays on to judge at Bishop Burton CPEDI2* in Yorkshire. Wendy said, ‘Hartpury is a fabulous event, regarded as the biggest CPEDI3* in the world, attracting a huge number of international competitors, and we hope to see a few Australian riders there, gaining points for Normandy World Equestrian Games. ‘I am looking forward to judging at Bishop Burton again, they made John and myself feel very welcome last time.  Bishop Burton is a beautifully appointed venue, constructed as an Olympic preparation venue for international horses competing at the London Olympics.’ 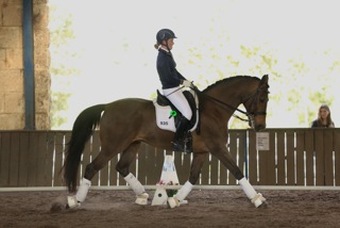