Lorenzo, a son of Stirling Lukas, was bred by Lisa Sylvester of Joshua Brook Stud. He was the only foal his dam produced, she was such a difficult mare to handle, and he was also difficult as a youngster, that Lisa chose not to breed any more in her lineage.  He started as a very complex individual, but is now the best horse Wendy has ever and trained, and shows talent for most of the harder movements in FEI. Some awards Lorenzo has enjoyed are Hi Point Medium Dressage Leaderboard Winner, Narbethong Indoor Championships Medium Dressage Leaderboard Winner, and Isuzu Series Reserve Champion in Advanced.

Harry Boldt, whose international coaching success kept German Dressage in an unassailable position for so many years, deserves the credit for a lot of Lorenzo’s success. Harry helps Wendy every week, and the knowledge and advice she has gained from him has made a huge difference. Lorenzo also has help fom Di Jenkyn, Manolo Mendez and Lone Jorgensen when they are in WA for clinics.

‘Lorenzo had led a very quiet, sheltered life on a property 3 hours from Perth, surrounded by a cattle farm. When he arrived at Ellis Brook he went into a kind of culture shock, because our place is quite busy, and he was scared of just about everything.  There are always lots of areas in our training to work on, but he has matured into a much more confident horse than he was, and I have been really pleased with some of his performances, so it has been terrific for him to be awarded Gold and Silver Performance Medals at Elementary, Medium and Advanced, because most of the time, he really does try for me.’ In the last year we feel he has become more consistent in his work, and we are very proud that he has achieved the scores to be awarded something few horses here have achieved – an FEI Small Tour Silver Performance Medal. 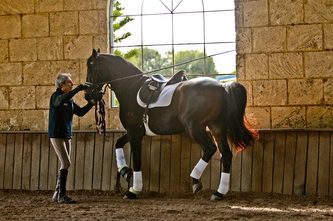 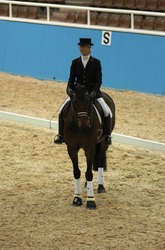 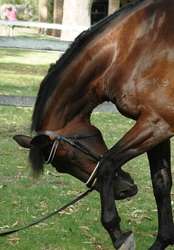 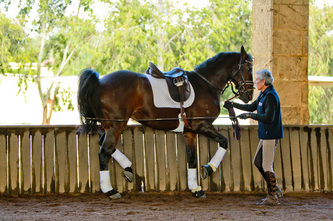